I am writing this post as a result of rereading Anne of Green Gables. It’s not because of Anne herself. Anne is probably the most extroverted of all of the extroverts out there. No, I had Matthew Cuthbert in mind. He is such a lovable character, but he is so introverted–which got me thinking. What other lovable introverts are lingering in the pages of literature? I’ve compiled a small list, but it’s not exhaustive. If you can think of any more, let me know…because I feel like I must be forgetting someone! 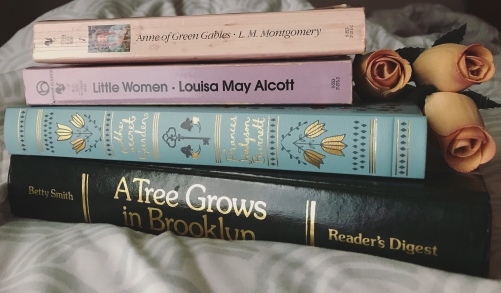 1. Matthew from Anne of Green Gables: Since I’ve already mentioned him, I’ll start with Matthew. Matthew is very introverted and also very shy. (There is a difference, by the way, but I’m not going there right now). Particularly, Matthew is scared of talking to girls, except for a couple who he is comfortable with. Yet he takes to Anne almost immediately, especially glad that she does all of the talking and doesn’t expect him to respond–a feeling that I can relate to. Matthew is one of my favorite characters from the series…so sweet and thoughtful! I’m just sad he doesn’t get to be in all of the other books.

2. Beth from Little Women: Beth is another one of the more obvious introverts in literature. She is also very shy, choosing to study from home rather than having to go to school. Beth is also a shining light in her home–gracious, loving, understanding, and always wanting to do better. She is the one character in the book who never gets into any major squabbles with the other characters, even though she does face her own internal conflicts. I’m not saying that all introverts possess these special qualities, but these qualities do set Beth apart and make her beloved by her fictional family and by readers alike.

3. Elinor from Sense and Sensibility and Anne from Persuasion: Some of Jane Austen’s most lovable heroines are introverts (which I have actually talked about in a past post), but I think two of my favorites are Elinor and Anne. Both of these characters are dependable, sensible, trustworthy, and discrete. Plus, they are both obvious introverts, having no interest in the “party scene” and preferring to spend time with those who truly know them.

4. Mr. Darcy from Pride and Prejudice: While on the subject of Jane Austen, I might as well mention Mr. Darcy. Mr. Darcy is one of the more disagreeable introverts, converting his discomfort in social situations into disdain for society. But we have to love Mr. Darcy in the end, after he realizes the error of his ways. Part of me actually relates to Mr. Darcy. I am definitely not graceful in society, and I only hope that I don’t appear too Darcy-ish.

5. Mr. Badger from The Wind in the Willows: Enough with humans! Let’s talk about animals for a change! Mr. Badger is probably my favorite character from this book. He is dependable, sensible, and a fiercely loyal friend. Even so, his friends know to give him some space. When Mr. Mole wants to go see him, the Water Rat tells him that Badger appears when he wants to and that he shouldn’t be bothered. This actually sounds like a brilliant arrangement for me…though in practice, I’d probably get too lonely.

6. Francie from A Tree Grows in Brooklyn: The characters listed so far reveal that typical introverts may be very dependable and sensible, but Francie shows that they can also have vivid imaginations and a longing to learn and create. Francie definitely lives inside her head and figures out early on that she is a story teller. She also loves to read. The second chapter talks about her trips to the library and her plan to read a book a day. Despite her family’s hardships and financial struggles, Francie also pushes her way through school with great determination.

7. Jane from Jane Eyre: This is another character with great determination. Without any favors from anyone, Jane takes initiative by learning as much as she can with the education provided to her and by reaching out to improve her circumstances, thus finding Mr. Rochester. Jane is also strong-willed…stubborn in a good way. She does not bend her opinions to impress anyone. She also stays with her morals by leaving Mr. Rochester even when he begs her to stay. So, although Jane is low-key in society, she is not a weak character.

8. Mary Lennox from The Secret Garden: Unattended, Mary’s introversion might have turned her into a regular Mr. Darcy, but she ends up all right after people stop spoiling her. It’s only sad that it took such tragedy for a change to occur. Taken to a large estate and left to her own devices, Mary’s imagination comes to life. While Francie is inspired by reading, Mary is inspired by nature. Mary also discovers two friends who she becomes very close to and is able to share her passion with them. I love this book…and also the movie from 1993. I want to watch it now!

In summary, what we have learned from all of this is that the introverts portrayed in literature are some of the most sensible, dependable, creative, and kindest characters around. That’s a group that I’m happy to identify with.

Any characters I forgot? Let me know in the comments!

Edinburgh has some CUTE bookshops like this one here. Swipe to see my lovely purchase! 😍😍😍 . . . #books #book #reading #bookstore #bookshop #christmascarol #christmasbooks #classicbooks #charlesdickens #bookblogger #blogger
I wanted to bring ALLLLLL of these home with me! 😍😍😍 . . . #books #reading #book #bookstore #bookshop #antiquebooks #classicbooks #janeyre #bookblogger #blogger
A bookstore to get lost in. 😍 . . . #books #bookstore #reading #bookshop #book #classicbooks #bookblogger #blogger
Touring Glasgow today when I found the TARDIS. Heard there were five of these in the city, and I found three! Excited to see Edinburgh tomorrow! . . . #doctorwho #glasgow #scotland #nerd #bookblogger #blogger
“If I were a water vessel, I imagine I’d be a little fishing boat that goes out just far enough for the passengers to catch the good stuff, but not so far away that I couldn’t deliver them home to a comfortable dinner. I confirm the fact–I have stayed close to the metaphorical shore for most of my life...” Read more about trusting God while sailing into the metaphorical horizon in my most recent blog post (link in bio)! I also talk about this lovely quote by C.S. Lewis, and also link to a song by @jjhellermusic that I think you should listen to! ❤️ 📷 @lifeisjustdandi . . . #cslewis #christianity #quotes #trust #anxiety #future #plans #god #trustinggod #christian #christianblogger #blogger #poem #poetry #books #reading #bookblogger #cslewisquotes
You know why I use bookmarks instead of random pieces of paper and other items? Because I find ones with quotes like this, and I can’t resist. 😊😍📚📖 . . . #books #reading #bookmarks #nathanielhawthorne #quotes #words #readingquotes #bookblogger #blogger #writing #blogging #journals #journaling #write #writer
Any one else have a special journal just to store quotes in? Since I don’t like writing in books, I instead put sticky tabs in the books as I go and when I finish, I write all the best quotes in my quote journal. I love going back through it sometimes and rediscovering treasures. This jewel is from Overcoming Fear, Worry, and Anxiety by Elyse Fitzpatrick. . This is why we can have faith as small as a mustard seed...because the God we have faith in is powerful. So it doesn’t depend on the greatness of our faith but on the greatness of his might. 🎉 . . . #books #reading #journals #quotes #quotejournal #christianity #faith #god #christianbooks #elysefitzpatrick #christianblogger #bookblogger
In my last post, I displayed some of my favorite books. But you can’t leave out Jane Austen!!! 📖 📚 . . 📷 @lifeisjustdandi . . #books #reading #bookloversday2019 #internationalbookloversday #janeausten #senseandsensibility #classicbooks #bookstagram #classicbookstagram #bookstagrammer #bookblogger