Aaaaand…I’m back–after a crazy couple of weeks. Two weeks ago, I moved into a new apartment in a new town, and I’m still trying to get all my things situated. One reason the unpacking process has taken so long is because I darted away to North Carolina shortly after moving in, and I stayed there for a week adventuring with friends.

I had a grand time in North Carolina, staying up late with my girl friends and seeing new sights during the day. This trip also marks my first time on a plane! Now I can check that off my bucket list!

It was such a strange sensation to be above the clouds! 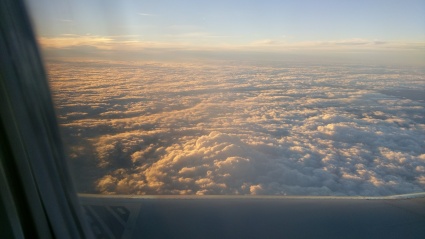 One of my favorite parts of the trip was seeing the sea for the first time. I’ve talked about my enthusiasm for the sea in a past post, and seeing it in person was not a let down! The blue-green waves were mesmerizing, and I’m a bit sad to be back in land-locked Oklahoma again. It seems a bit unfair that I can’t take any weekend trips to the beach. No matter which direction I travel, it would take me hours to reach the shore! Since I couldn’t stay or bring the ocean back with me, I at least collected several sea shells, though a bit of their magic is lost out of their native surroundings. 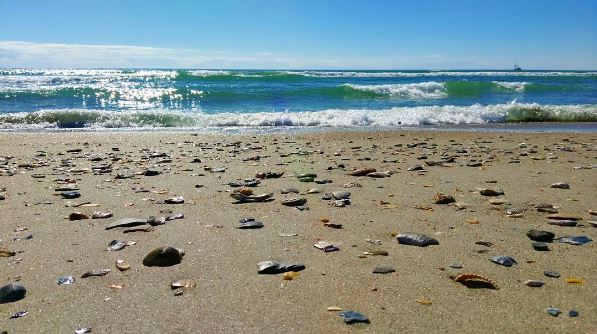 The trees of North Carolina were also new for me. In Oklahoma, I’m used to bare rolling hills. In contrast, every spare space of North Carolina seems to be covered in trees. The photos below are from a walking trail we went to, and the trees there are a lot taller than any I’ve seen. While there, a line from a Robert Frost poem kept crossing my mind: 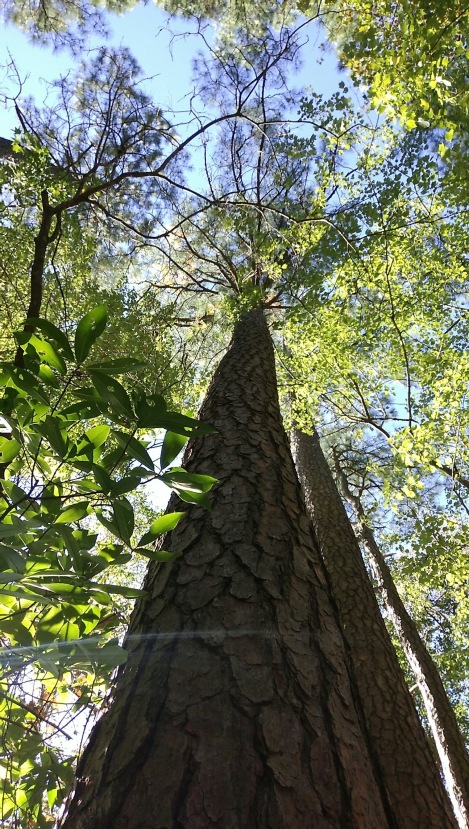 We visited a few different towns in North Carolina. We saw the River Walk in Wilmington and got to tour a ship. We attended a fall festival in downtown Swansboro and stayed for a showing of Hocus Pocus. My favorite town, however, is New Bern. I wish I could bring New Bern to Oklahoma right now. Either that, or drag my entire family to North Carolina, so I could live in New Bern and visit the ocean weekly. New Bern has such a “quaint town” feel, and I wish I could have spent more time there.

The mascot for New Bern is the bear, which is clear by the bear statues all over town. The one below is “Dr. Paw,” and he stands right outside the dentist’s office.

As a librarian, I of course had to take a peek inside the New Bern library. It’s just as cozy inside as it is outside! 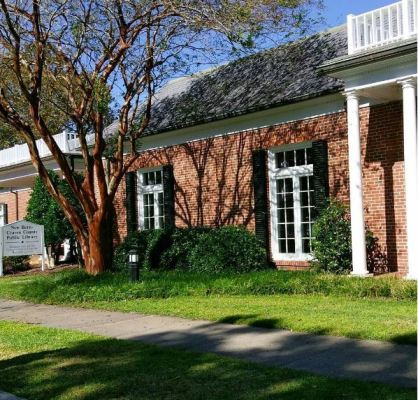 There were also several “little libraries” set up in all of the NC towns we went to. I had heard of these, but we don’t have any here in Oklahoma that I know of. I was glad to finally see one in person!

Even with all of the fun adventures I’ve had, I am glad to be in one place again. After all, I am a hobbit at heart. Even when I was out seeing new sights, part of me wanted to be at home among familiar surroundings. Before my flight, when I was all nervous about taking off, my mom encouraged me by saying I was like Bilbo Baggins, going off on new adventures. (Aside: Yes, you don’t have to tell me. I already know I’m a nerd). And then I messaged her back this quote from The Hobbit.

“Bilbo…felt more tired than he ever remembered feeling before. He was thinking once again of his comfortable chair before the fire in his favorite sitting-room in his hobbit-hole, and of the kettle singing. Not for the last time!” (Tolkien 1997).

So, even though I’m happy for adventures and am looking forward to the next one, I’m glad to be back home!