In celebration of Hobbit Day, which is actually a thing (read about it here), I would like to unearth a post that I published in September 2015. TWO YEARS AGO! It’s hard to believe. This was from the last time I read The Lord of the Rings, which means I’ll be due for another reading maybe, say, in a couple years? I wonder if the next two years will also fly by.

Every time I read The Lord of the Rings, I find more literary treasures to enjoy, hidden within the prose, the setting, and the characters. When I reread the series this past January, I particularly noticed qualities in the loyal hobbit Samwise Gamgee which made me like him even more than I already had. If you’ve read the books or seen the movies, you know that Sam is very important to the great quest to destroy the ring. Basically, Frodo would have failed without him. However, the following quotes show how great Sam is even apart from the fact that he pretty much saved Middle Earth single-handed.

“So why are you just now publishing this post?” you might ask. Well, I don’t rightly know. Half way through reading The Fellowship of the Ring, I began copying down Samwise quotes, and after finishing The Return of the King, I typed up the quotes immediately. That was back in February. Apparently, something–or many things–distracted me for about seven months. But I’m back now for a belated celebration of Hobbit Day, which was on the 22nd. 🙂

Now that I’ve babbled for a sufficient amount of time, I present to you several quotes which should make you like Samwise Gamgee even more than you already do:

“Snow’s all right on a fine morning, but I like to be in bed while it’s falling.”

You might not see the beauty in this quote, but–for me–these words spoken by Samwise himself show that Sam has a completely accurate view of winter. I’m not a huge fan of winter myself, so I’m glad to know that Sam is on my side.

“But Sam did not answer: he was staring back up the cliff. ‘Ninnyhammers!’ he said. ‘Noodles! My beautiful rope!'”

Sam just used the words “ninnyhammers” and “noodles” as exclamations. Any more explanation needed? I think not.

‘Yes sir, and showed your quality: the very highest.'”

This quote might not seem like much to you, but to me, it looks an awful lot like Sam just complimented one of my favorite characters from the book, Faramir.

“It’s the job that’s never started as takes longest to finish, as my old gaffer used to say.”

“Far above the Ephel Duath in the West the night-sky was still dim and pale. There, peeping among the cloud-wrack above a dark tor high up in the mountains, Sam saw a white star twinkle for a while. The beauty of it smote his heart, as he looked up out of the forsaken land, and hope returned to him. For like a shaft, clear and cold, the thought pierced him that in the end the Shadow was only a small and passing thing: there was light and high beauty for ever beyond its reach.”

Sam finds hope in any situation. He sees the bigger picture, and he’s no Debbie Downer!

“But even as hope died in Sam, or seemed to die, it was turned to a new strength. Sam’s plain hobbit-face grew stern, almost grim, as the will hardened in him, and he felt through all his limbs a thrill, as if he was turning into some creature of stone and steel that neither despair nor weariness nor endless barren miles could subdue.”

“‘But if it’s to be a flower-name, then I don’t trouble about the length: it must be a beautiful flower, because, you see, I think she is very beautiful, and is going to be beautifuller still.'”

Sam sure is sweet in this quote as he’s trying to think of a name for his daughter. Plus, he can use the word “beautifuller” and get away with it. Not anyone can do that. 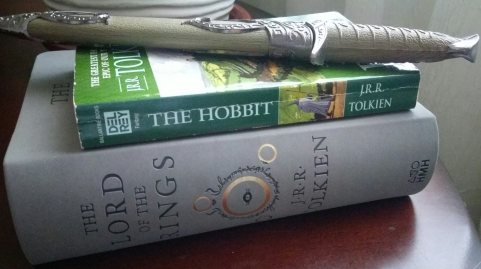 Edinburgh has some CUTE bookshops like this one here. Swipe to see my lovely purchase! 😍😍😍 . . . #books #book #reading #bookstore #bookshop #christmascarol #christmasbooks #classicbooks #charlesdickens #bookblogger #blogger
I wanted to bring ALLLLLL of these home with me! 😍😍😍 . . . #books #reading #book #bookstore #bookshop #antiquebooks #classicbooks #janeyre #bookblogger #blogger
A bookstore to get lost in. 😍 . . . #books #bookstore #reading #bookshop #book #classicbooks #bookblogger #blogger
Touring Glasgow today when I found the TARDIS. Heard there were five of these in the city, and I found three! Excited to see Edinburgh tomorrow! . . . #doctorwho #glasgow #scotland #nerd #bookblogger #blogger
“If I were a water vessel, I imagine I’d be a little fishing boat that goes out just far enough for the passengers to catch the good stuff, but not so far away that I couldn’t deliver them home to a comfortable dinner. I confirm the fact–I have stayed close to the metaphorical shore for most of my life...” Read more about trusting God while sailing into the metaphorical horizon in my most recent blog post (link in bio)! I also talk about this lovely quote by C.S. Lewis, and also link to a song by @jjhellermusic that I think you should listen to! ❤️ 📷 @lifeisjustdandi . . . #cslewis #christianity #quotes #trust #anxiety #future #plans #god #trustinggod #christian #christianblogger #blogger #poem #poetry #books #reading #bookblogger #cslewisquotes
You know why I use bookmarks instead of random pieces of paper and other items? Because I find ones with quotes like this, and I can’t resist. 😊😍📚📖 . . . #books #reading #bookmarks #nathanielhawthorne #quotes #words #readingquotes #bookblogger #blogger #writing #blogging #journals #journaling #write #writer
Any one else have a special journal just to store quotes in? Since I don’t like writing in books, I instead put sticky tabs in the books as I go and when I finish, I write all the best quotes in my quote journal. I love going back through it sometimes and rediscovering treasures. This jewel is from Overcoming Fear, Worry, and Anxiety by Elyse Fitzpatrick. . This is why we can have faith as small as a mustard seed...because the God we have faith in is powerful. So it doesn’t depend on the greatness of our faith but on the greatness of his might. 🎉 . . . #books #reading #journals #quotes #quotejournal #christianity #faith #god #christianbooks #elysefitzpatrick #christianblogger #bookblogger
In my last post, I displayed some of my favorite books. But you can’t leave out Jane Austen!!! 📖 📚 . . 📷 @lifeisjustdandi . . #books #reading #bookloversday2019 #internationalbookloversday #janeausten #senseandsensibility #classicbooks #bookstagram #classicbookstagram #bookstagrammer #bookblogger