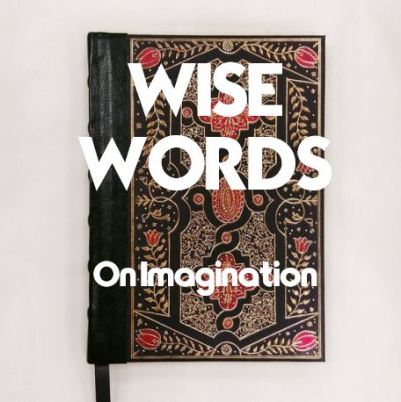 Last year, I read Betty Smith’s A Tree Grows in Brooklyn, and now it is one of my forever favorites. It had been on my to-read list for years, and I’m glad I finally got to it. It makes me excited to discover what other treasures I’ll find as I chip away at my reading list.

A Tree Grows in Brooklyn is a coming-of-age story about a young girl named Francie who is growing up in Brooklyn in the early 1900s. Francie and her family go through loads of heartbreak and hard times, mingled with happy moments. Through it all, one quality makes Francie stand out from everyone else–her imagination.

The theme on the importance of imagination begins early on in the book. Before Francie’s story really starts, her parents’ pasts are recounted. We learn how they meet, fall in love, marry, and eventually have their first child–Francie. When Francie is born, her parents are not prepared at all. In the scene from which today’s “wise words” are derived, Katie (Francie’s mother) is lying on her bed, anxious about the future and how she can provide for her daughter in such an unsure world. Right beside her is her mother, offering advice. Among other things, she tells Katie to tell her child fairy tales about mythical creatures and fictional worlds, and even about Santa Claus. Katie responds with doubt, questioning the use of telling her child a world of lies, to which her mother responds with these words:

“The child must have a valuable thing which is called imagination. The child must have a secret world in which live things that never were. It is necessary that she believe. She must start out by believing in things not of this world. Then when the world becomes too ugly for living in, the child can reach back and live in her imagination” (Smith 1943).

These words remind me of Anne Shirley from L.M. Montgomery’s Anne of Green Gables. Anne spends her entire childhood being passed from one foster home to another, and the foster parents she lives with seem to only use her for labor. Even though Anne’s imaginative spirit often leaves her with her head in the clouds, imagination is also what gets her through some rough years. When circumstances are looking down, Anne finds pleasure in the beauties found in her imagination. And when things get better, imagination helps Anne to flourish.

One favorite scene from Anne of Green Gables (and I have many) is when Marilla and Matthew decide to keep Anne on a trial basis. Anne asks Marilla:

“‘Can’t I call you Aunt Marilla?’
‘No. I’m not your aunt and I don’t believe in calling people names that don’t belong to them.’
‘But we could imagine you were my aunt.’
‘I couldn’t,’ said Marilla grimly.
‘Do you never imagine things different from what they really are?’ asked Anne, wide-eyed.
‘No.’
‘Oh!’ Anne drew a long breath. ‘Oh, Miss—Marilla, how much you miss!’
‘I don’t believe in imagining things different from what they really are,’ retorted Marilla. ‘When the Lord puts us in certain circumstances He doesn’t mean for us to imagine them away’” (Montgomery 1908).

Eventually Marilla softens, and Anne becomes more sensible. Instead of trying to make life what it isn’t (such as trying to change her name to “Cordelia”), she uses her imagination to shape the situations that she faces.

Imagination also shapes Francie’s character in A Tree Grows in Brooklyn. Growing up in rough circumstances, Francie uses her imagination to see the magical parts of life. Francie first discovers her knack for imaginative creativity by her ability to tell great lies. Of course, this leaves her with extreme guilt. But when Francie’s teacher discovers one of her lies, she doesn’t scold her, but instead directs her imagination to writing stories instead of telling lies. And even though stories in themselves might be considered lies in that they are not true, they can reveal truth within them. In fact, I recently read a great blog post at Yours Truly, Lenae that talks about this exact subject. Go check it out here!

In the end, Francie channels her imagination in an effort to grow, learn, and reach her goals. What may at first seem like children’s play or an escape from the real world actually fosters creativity, ambition, and a desire to learn. Even as adults, we can continue to learn through the truths we find in fiction.

As I have mentioned in past posts, I lead story time at the library where I work. Though I am definitely not made to stay in this area of librarianship, I do enjoy seeing children’s imaginations at work through the stories I tell them. I am glad to do at least that much.