Yes, it’s been so long since my last post that Adele lyrics are required to help us get reacquainted. My last post was in December, for goodness sake!

…and that’s about all I can think of. But even that’s been a difficult change. It’s been two months, and I still write down the wrong year!

But really, there have been other changes. Like the two classes I’m taking–the two classes which have caused my lack of blog posts! But I’m here now, and that’s all that matters. And even if these past two months have been uneventful (besides school), I have a feeling things are going to pick up. For example…

Later this month, I’m going to a Ben Rector concert! Yay! Ben Rector is a fabulous singer, and I’m a big fan (in case you couldn’t tell when I mentioned him here and here). It’s going to be great. My sisters and I are going to (try to) get front seats and wave and sing along and have all sorts of fun. For a little taste of what you’re missing out on, listen here:

At the end of this month, I’m going to the Tulsa (OK) Zoo, which I have never been to. Oh, boy! Is it childish that what I’m looking forward to most is the petting zoo, where I’ll–perhaps–get to see (and pet) wallabees, sheep, and otters? I mean, what adult wouldn’t be excited about that? A BORING adult, that’s what! I mean, just look at it!

In April, I am joining my fellow nerds and attending–yet again–the annual medieval fair, which I mentioned here. I don’t dress up or anything, but I take delight in all things medieval, like watching the jousting event, throwing axes at wooden walls, and riding camels. (I don’t know how riding camels is medieval, but it was at the fair, so it must be. 😉 ) 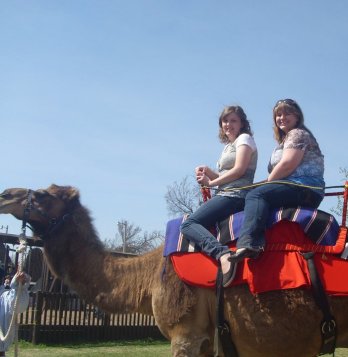 I could go on describing particular details about my adventurous life, but then I might accidentally head into 2017 and 2018. I don’t want to go getting ahead of myself (though I’m very good at that).