Yesterday while attending the Medieval Fair in Norman, Oklahoma, I probably had more fun than a normal grown-up should have. For one thing, I got to ride a horse. This might surprise some, but I’ve lived in Oklahoma my entire life and have only ridden a horse twice (yesterday included). My excitement could not be concealed while waiting in line with all of the actual children.

We (my companions and I) also tried on various crowns, hats, and helmets throughout the day. Here’s me and my sister being princesses. Don’t we look like royalty to you? 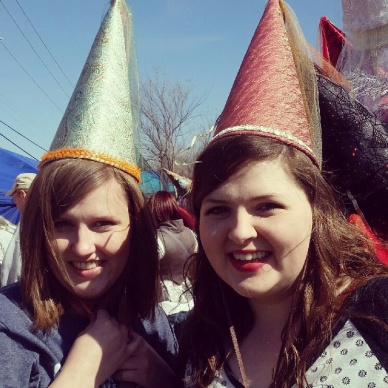 Another highlight of the day was ax-throwing. Though I was aiming the ax at a giant wooden wall, I didn’t make my mark. Neither of my axes stuck to the board, but the person manning the station said I might have at least knocked someone out with those throws. And I was hoping to be a natural! ,,,kind of like Tris from Divergent, though she was throwing knives.

The signs at the ax-throwing station said something to the effect of “Take Your Life into Your Own Hands.” And I truly felt that I was doing just that. I’m not used to holding axes (or any sort of weapon), so part of me felt that I would injure myself or others. But now that I know I can handle it, I wish I could try again!

This adventurous event must have gotten to me somehow because before leaving the Fair, I bought a dagger. Not until yesterday did I realize that one of my goals in life was to own a dagger. It was a desire which I could not conquer. One of the daggers looked like Sting, Bilbo’s sword from The Hobbit, so I just couldn’t resist. Here are a couple photos of my new treasure:

Only a couple hours ago did I find out that my new dagger is actually a Sting replica. My brother and I looked up a photo of Sting, and it turns out the markings are exactly the same. And so it seems that I’m building up my nerdy artifact collection, which now includes both this dagger and a Harry Potter wand, which I made myself. View and admire. 🙂