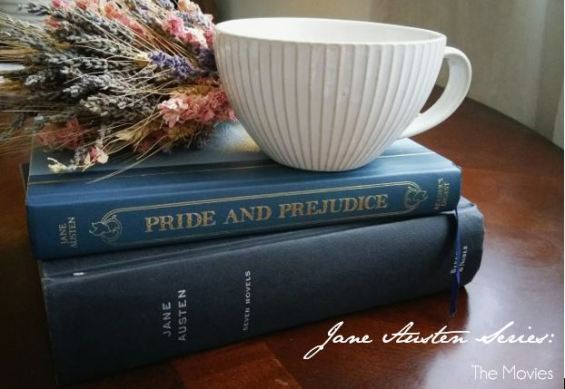 Since I’m watching Sense and Sensibility right now, I figured it’s time to continue on to part two of my Jane Austen series. In part one, I discussed my overall obsession with everything Jane Austen, and then I rated Jane Austen’s men. This time, I want to walk you through a Jane Austen movie guide. There are so many movie versions out there that someone could easily grab one of the not-so-great versions. That’s where I hope to help. I’ll let you know which movies I enjoy the best and which of the movies I can’t stand at all. And then you can watch them all and judge for yourself. I just hope you agree with me.

This 1995 version of Sense and Sensibility with Emma Thompson and Kate Winslet is the one I’m watching right now. If you asked me how many times I’ve seen it, I wouldn’t be able to tell you. I love everything about it…the actors, the music, EVERYTHING. My absolute favorite part (…which is coming up 🙂 ) is when Colonel Brandon sees Marianne for the first time. Watch it…you’ll understand. Colonel Brandon is played by Alan Rickman…who some of you might know of as Snape. But he’s really not Snape in this movie because of the fantastic acting and costumes. Willoughby is Colonel Brandon’s rival. That being said, I would have fallen for him, too–despite his horrible deeds. I mean, he carries around Shakespeare’s Sonnets…”Love is not love which alters when it alteration finds…” Ahhh, gotta love it. Just as a side note, I also enjoy the 2008 version. It’s not as good, and it took me a while to get used to it, but I like to watch it every so often.

Just a warning–this might make some people angry and confused. I’m sure a lot of you have seen and enjoyed the 2005 version of Pride and Prejudice with Keira Knightly, but I just want  you to know straight out that–besides the soundtrack–I do not like that movie at all. I won’t discuss the particulars of why I don’t like it because that would take an entire post of its own. Instead, I’ll just let you know why I do like the 1995 version way better. This version stars Colin Firth as Mr. Darcy, and this was before Colin Firth was really famous and well known. Even so, this is really one of the only movies I like with Colin Firth in it. I especially like the part at Pemberley with his swim in the lake. I saw an article recently in which Colin Firth expressed how–to this day–he cannot understand what all the hype is about with that scene. Well, here’s my explanation: It’s not really the sight of Colin Firth in a wet shirt that’s caused all the excitement. What it’s really about is the sight of prim and proper Mr. Darcy in a wet shirt. And then Lizzie sees him, and even she is uncharacteristically at a loss for words. The rest of the movie is also amazing. It follows the book pretty exactly–oh, and it’s six hours long. But that makes it even better, right?

There are two versions of Mansfield Park that I know of, but one of them I can’t get into at all. Ever seen the BBC version starring Rose from “Doctor Who” (aka Billie Piper)? Yeah, I can’t stand it. It might be because the actor who plays Edmund also plays the slimy preacher from the good version of Emma. But let’s not talk about that. Let’s talk about the good 1999 version. I love this version and have seen it MANY times. It doesn’t help that it’s on my Netflix so I can access it easily whenever I’m at a loss for what to watch.

Fannie and Edmund are perfect in this movie, and all of the other actors are great, too. I like Henry Crawford, too–even though he turns out to be a slime ball. But the scene where he reads aloud to Fannie just really gets me. A good reading voice is very attractive.

I must admit that I haven’t read the book for this one yet, so I don’t know how close the movie is to the story line. I’ve heard that there are some differences (i.e. Fannie has a close sister instead of a close brother). But even with these differences, I can’t imagine a Jane Austen fan not liking this movie.

And that’s all for now, folks. I’ve decided to save Emma, Northanger Abbey, and Persuasion for later. Stay tuned. 🙂